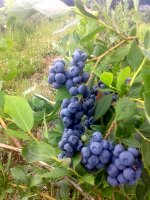 Good growing conditions this spring and and we'll be picking the NEW CROP BY 1 JULY 2021. Come get 'em! We ask that you give us a call ahead if you want to pick up 100 lbs or more. The fresh season typically ends about 25th of August, but if you would like to have berries after the 25th, call and we'll try to have berries for you.

Blueberries have been a mainstay at Aldrich Berry Farm & Nursery, Inc for over a half-century. But we continue to plant newer varieties as they serve our marketing program.

Many people 'buy with their eyes' so large berries sell well. We have added some newer varieties which have been selected not only for size but also for keeping quality, attractiveness, and good eating....flavorful and sweet that should be eaten by the handful!

Our blueberries are locally grown right here on our farm and sold farm direct. See our map on our Contact Us page. 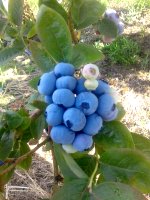 Our fresh fruit season runs from early July until late August. We utilize a number of varieties which overlap in their ripening season. A variety usually will only be 'in' for 2 - 3 days at a time so it is a little difficult to get your heart set on getting a particular variety. However, a phone call or two can time your visit when we will have your favorite variety available.

Many customers ask for "the big blues". They are most likely asking for Bluecrop which are usually ripe on about 15-20 July - mid-late August. We very often have Bluecrop every day. But variety Olympia is highly sought after for its flavor and anthocynins and ripens in mid season but is only 'in' for a day or two at a time so make that phone call! 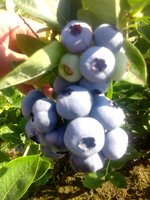 We have developed an ability to again make available a couple of the older but smaller fruited varieties. The smaller fruit works well for cooking & baking and, as a simple matter of bio-physics, are higher in health values than some of the more popular larger-fruited varieties. It really is a good idea to arrange ahead to get these because of our scheduling. Think of about 20 July and later.